What is Integrated Planning?

Integrated planning is the effective management of resources through collaboration of efforts and cooperation of various entities. The integration of multiple water management strategies via multipurpose projects creates opportunities to meet regional water resource needs, efficiently use fiscal resources, and provide the public with tangible community benefits. 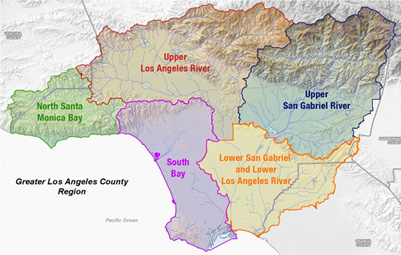 West Basin is an active participant in the Greater Los Angeles County Integrated Regional Water Management Plan (IRWMP). In 2005, several entities gathered to form a Region to apply for Proposition 50 funding to the Department of Water Resources and the State Water Resources Control Board.

The Greater Los Angeles County Region has achieved several accomplishments since its formation in 2005 including:

West Basin is the Chair of the South Bay sub-region Steering Committee. The South Bay usually meets on a monthly basis at West Basin’s office in Carson.  For all meeting information related to the GLAC Region or the South Bay Sub-region, visit http://www.ladpw.org/wmd/irwmp/index.cfm

For more information about the South Bay sub-region or to get involved in the process, contact E.J. Caldwell at 310-660-6286 or  edwardc@westbasin.org