With our proximity to the ocean here in southwest Los Angeles County, seawater has the potential to seep into the aquifers and mix with groundwater, making it too salty to drink. Protecting the groundwater aquifer is important because it can store up to one million acre-feet (one acre-foot equals approximately 326,000 gallons) of drinking water, which is more than the water contained in the largest reservoir in Southern California. 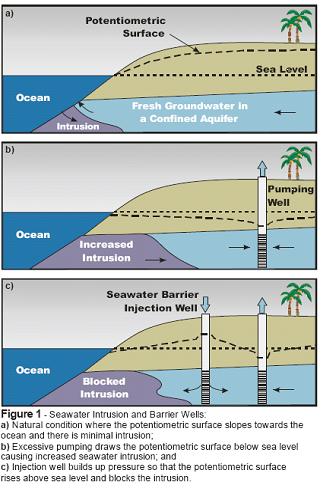 The Los Angeles County Flood Control District (LACFCD) owns, operates, and maintains the barrier projects. The Water Replenishment District of Southern California (WRD) purchases all of the water that is injected into the barriers. WRD protects the basin through groundwater replenishment, deterrence of sea water intrusion, and groundwater quality monitoring of contamination through assessments on water pumped from the WRD service area.

In an effort to decrease our dependence on imported water where appropriate, the amount of high-quality recycled water injected into the seawater barrier has steadily increased from 50% to 75%. West Basin’s recently completed Phase IV water recycling project has made this increase possible, resulting in a decrease in the amount of imported water needed for the barrier (from 50% to 25%), allowing approximately 5,000 acre-feet of imported water to be conserved each year. In addition, recycled water is produced locally, making it more reliable than imported water, which is subject to drought, regulation, and changes in weather patterns.

West Basin is working with WRD to increase the amount of recycled water injected into the Barrier to 100% to further conserve imported water supplies and provide a more reliable, high quality source of water to the aquifer.

The LACFCD provides water to the Dominguez Gap Barrier from their Terminal Island Treatment Plant. They also operate and maintain the barrier. West Basin is coordinating with the Los Angeles Department of Water and Power, WRD, and the LACFCD to develop plans for serving recycled water to supplement a portion of the Dominguez Gap Barrier from West Basin’s satellite water recycling facility in Carson.

At this time, it is estimated that West Basin could potentially serve the Dominguez Gap Barrier up to approximately 1 MGD (million gallons per day) of high-quality recycled water from the Carson Facility. The proposed expansion will bring the total amount of recycled water to almost 50%, with the remaining 50% imported water.